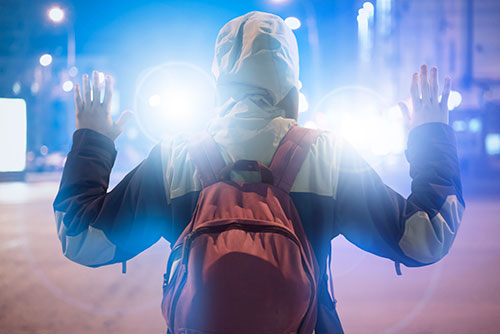 Thanks to movies and TV shows, even kids have heard of the Miranda warning, which typically begins with some variation of: “You have the right to remain silent. Anything you say may be used against you in court…”

As with adults, Miranda rights apply to juveniles who are taken into police custody and whom police want to question. But in Colorado, there are distinct differences between how the Miranda warning pertains to juvenile crimes versus adult crimes. In this post, the Denver criminal defense lawyers at Wolf Law discuss the circumstances in which police can question minors.

What are the Rights of Juveniles in Police Custody in Colorado?

In Colorado, the term “juvenile delinquency” refers to criminal acts committed by minors between the ages of 10 and 18. Like adults, juveniles who are taken into police custody related to a crime must be informed of their Miranda rights, which include:

When it comes to juvenile crimes in Colorado, however, these rights must be issued to both the minor in custody as well as the minor’s parent, guardian or legal custodian. Once a juvenile is issued a Miranda warning, he or she cannot be questioned until a parent, legal guardian or attorney is present.

Waiving the Right to Remain Silent

The rights of juveniles in police custody are detailed in Colorado Revised Statutes Title 19, also known as the Colorado Children’s Code. The Children’s Code contains another important deviation in how the Miranda warning applies to minors as opposed to adults.

Statements made by a juvenile in police custody in Colorado are generally not admissible in court unless a parent, legal guardian or attorney is also present. One reason Colorado provides these extra protections to minors is that many juveniles don’t fully understand the implications of the standard Miranda warning.

A 2016 American Bar Association article cited research indicating that about 90 percent of juveniles in police custody nationally waive their Miranda rights. The article further noted that there are hundreds of variations on the Miranda warning nationwide and that most require at least an eighth-grade reading level. The ABA report also referred to studies of juvenile offenders that indicate most have below-average reading levels and that as many as 70 percent also have a diagnosable mental health disorder.

When and Why Juveniles Should Remain Silent

Silence does not equal guilt, and it’s advisable for juveniles in police custody to refuse to answer questions until a knowledgeable criminal defense lawyer is present.

Remaining silent can protect a juvenile suspect from unknowingly making incriminating statements. Police questioning sessions can be exhausting and confusing for minors, who may say things they don’t mean or may attempt to answer questions they don’t comprehend.

In fact, a 2014 study about the psychology of police interrogations found that juveniles are especially susceptible to making false confessions. Allowing a child to waive his or her right to remain silent without an attorney present for questioning could actually make things worse.

If you’re the parent or guardian of a minor who has been taken into police custody, it’s recommended to invoke the juvenile’s right to remain silent and contact a criminal defense attorney as soon as possible.

A skilled defense lawyer can protect the juvenile’s rights, ensure that police follow appropriate protocols during questioning, advise you of your legal options should the minor face formal charges, and represent the juvenile in court should a criminal case move forward. The Denver criminal defense attorneys at Wolf Law understand how intimidating criminal charges can be to youth as well as their parents or guardians, and we are compassionate advocates for juveniles confronted with criminal charges.

If you’re the legal guardian of a minor who is facing juvenile delinquency charges in the greater Denver area, please call us today at 720-479-8574 or contact us online to arrange a free consultation.