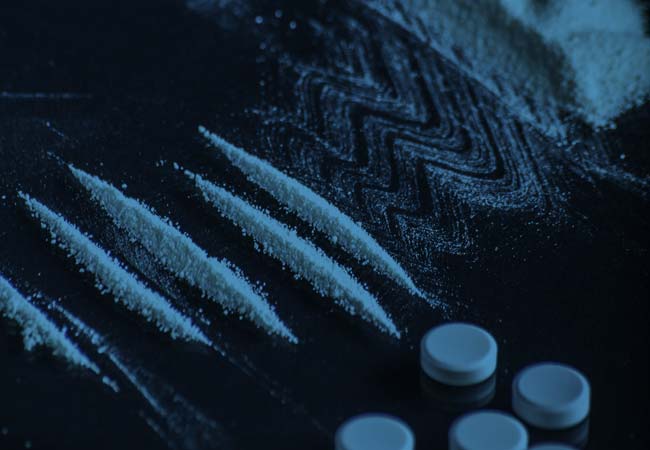 If you’re facing drug charges in Colorado, you have a right to qualified representation no matter how severe the offense.

To learn more about your options following a Colorado drug arrest, please call Wolf Law at 720-479-8574 for a free case evaluation.

According to the U.S. Sentencing Commission, drug offenses are the most common type of federal case; drug charges represented almost one-third of all cases reported to the commission in 2015. Of these drug offenses, nearly 90 percent involved drug trafficking charges.

Colorado’s Amendment 64 was enacted in November 2012 and allows for personal possession, cultivation, and private use of marijuana for those 21 years of age and older.

Following the adoption of Amendment 64, marijuana-related charges reduced statewide (not including Denver) by 80 percent from 2010 to 2014; and all drug charges are down 23 percent respectively. The Denver Department of Safety reported a 77 percent reduction in marijuana possession offenses from 2012 to 2014.

Today, marijuana drug possession charges are namely defined by an amount in excess of 1 ounce, which is the legal limit a person may purchase from a retail marijuana store.

Drug charges often involve addiction, dependency, and abuse. At Wolf Law, we understand the sensitivity of drug crimes and how drug charges impact families and the community at large.

While other drug defense attorneys in Denver may approach drug charges with a hatchet, we prefer a scalpel; this ensures every client gets the help they need, the representation they deserve, and a fair trial.

We take every step to ensure relevant details are made clear to the judge, the prosecutor, and the jury. The social, economic, and cultural complexities of a Denver drug case should not be ignored.

Denver has distinct racial disparities among marijuana charges, which have remained constant despite Amendment 64, including a disproportionate number of offenses correlating public consumption and people of color. 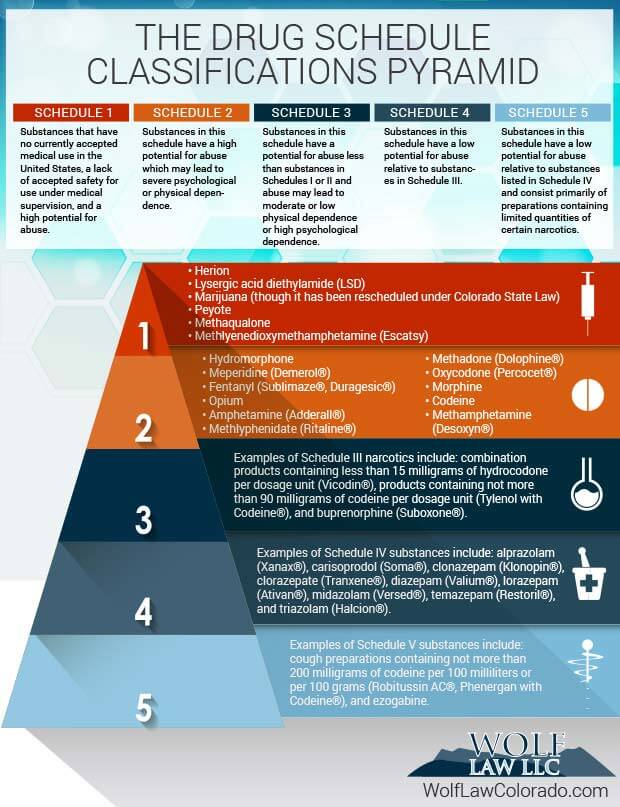 Drug classification determines how drug offenses are categorized and sentenced. Controlled substances are defined under federal drug “schedules,” which are categorized by risk of addiction:

In Colorado, all drug possession charges are classified by schedule, with the exception of marijuana. Drugs like codeine, and other common pain medications, may be possessed lawfully with a valid prescription.

Colorado drug penalties depend on the offense or act committed, the type of drug, and the drug amount involved in the charges. Generally, all Colorado drug charges fall into three categories: petty offenses, misdemeanors, and felonies.

Sentencing is also determined by a range of factors that can be either “presumptive” or “aggravated.”

Presumptive sentencing is most common and the default sentencing range; however, aggravating factors, such as the offender’s criminal history, parole status, etc., may persuade a judge to apply an aggravated sentence, which favors tougher sentencing and fine requirements.

A trial by jury is available to people who are charged with a Colorado drug crime. For first- and second-time drug offenders, Colorado has implemented special “drug courts” where defendants can enter into treatment programs in lieu of fulfilling a sentence.

Get the Drug Defense Lawyer You Deserve

Colorado drug laws are complicated, but we can help. Knowing who to call, when to call them, and what not to say to law enforcement is the first step in building your defense.

What you don’t know about Colorado’s drug laws can hurt you. When you need a Denver criminal defense lawyer, you need Wolf Law. 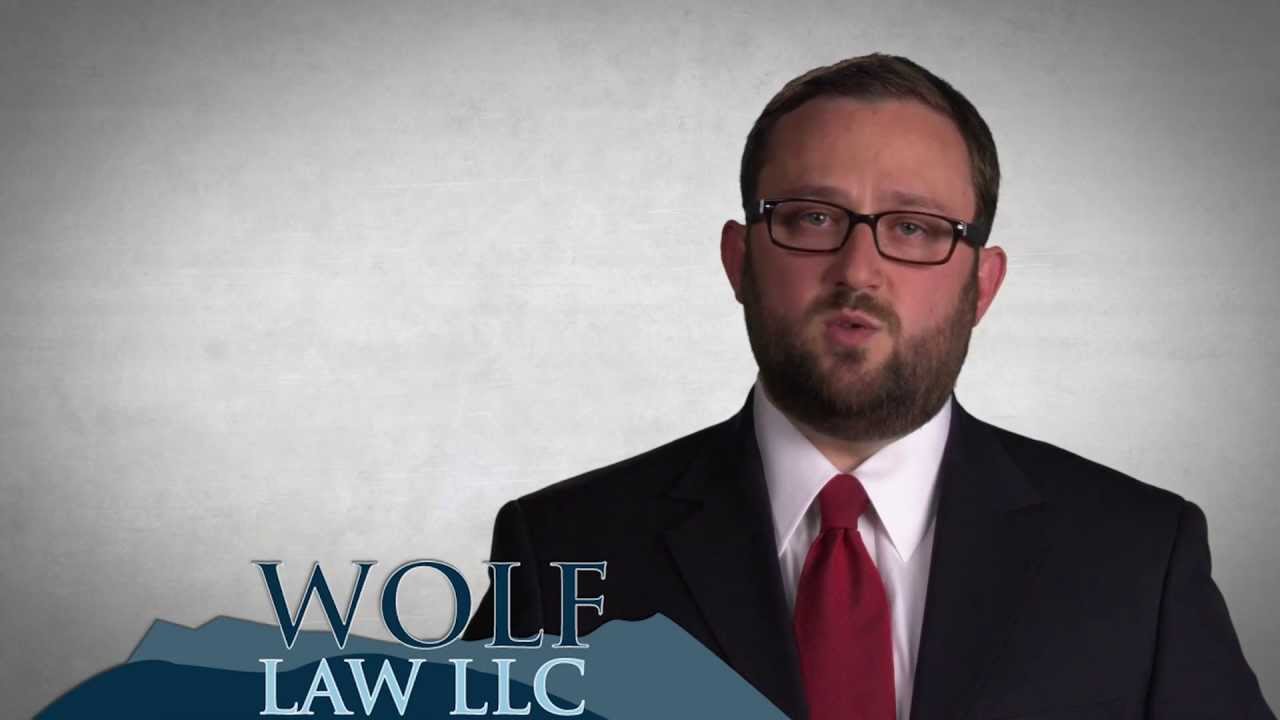 Drug cases are one area of the law, where you can really be charged at any level. You can be charged at the petty offense level in municipal court, at the misdemeanor level in county court or at the felony level in the district court. All of those charges can come with different sets of penalties and it’s important to have an attorney who understands the difference. At Wolf Law I handle all types of cases and drug classifications from pills, marijuana, heroin, cocaine, any drug offense that you have and any type of charge you’ve accrued, from any type of drug there is, at Wolf Law I can handle that type of case. It’s important to have an attorney who understands the drug laws, understands search and seizure law, which is so huge in drug cases and that’s something I do for my clients. I understand that sometimes my clients are dealing with dependency issues; addiction, things like that. And those are things that need to be handled sensitively, delicately, but not ignored. Too many lawyers go in with a blunt instrument, rather than coming in with a scalpel to try and deal with dependency and addiction issues, make the judge aware of it, make the prosecutor aware of it, and get someone the treatment they need. At Wolf Law, I always want to make sure that when you come in, I understand what’s going on in your life, what’s caused the issue to happen and try to find a way to help you.

I Trust My Future with Jeffery A. Wolf

My experience was very hard like many others facing any criminal charges against them. Jeffery A. Wolf was a very compassionate, caring individual that was there to help me through the entire court process. He is very knowledgeable about criminal law and was very helpful, getting my family and me through the whole criminal process. He fought for me in a time I needed someone the most, ensuring me that he was there for me and out to get the best results as possible from the court system. What an outstanding man to fight for the truth and be there for anyone with criminal charges, explaining the whole process very methodically and being pin point with all the facts. I was very confident in his experiences and knowledge that I would only trust my future with Jeffery A. Wolf. I had a great experience with him, allowing me to have the life I am here to live.

Jeff is not only great in the courtroom, but has a sense of caring and true passion for his profession. He takes the time to explain things with a productive attitude. I would highly recommend him and can’t thank him enough.