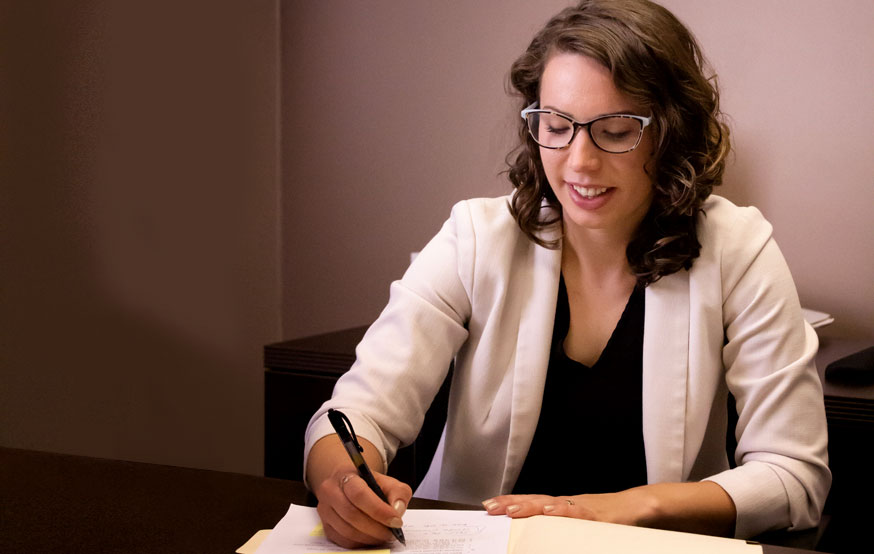 Cassandra Monahan is an associate attorney at Wolf Law. Ms. Monahan was born in Denver, and although she grew up on the East Coast, she has returned to Colorado to begin her legal career.

She earned her bachelor’s degree from the University of Maryland in Criminology & Criminal Justice and Psychology. During law school, Ms. Monahan was a student attorney with the Criminal Justice Clinic where she represented clients on misdemeanor charges.

Ms. Monahan is committed to providing the highest quality representation to individuals facing criminal charges and believes that understanding each client’s unique life circumstances is key to effective advocacy. In her free time, Ms. Monahan is an avid runner and hiker.

100% of Practice of Devoted to Litigation

I worked with Jeffrey on my first DUI case. I had a high BAC but instead of focusing on that, he had me focus on the things I could do before court to prepare. I did my part and he did too. 2/3 charges dropped, 1 largely reduced which prevented any jail time. I’m so thankful, highly recommend Wolf Law.

I Was Very Well Represented by Jeff

Regarding a DV assault charge, Jeff was able to have the judge do something he stated he’d never done in any similar case: he deferred my sentence, reduced probation, reduced the amount of classes I would have to take from being many weeks on end to 2 days, and instead of requiring a no-contact order (which would have left me homeless and unable to speak to my partner via any means), he placed me on a no-contact order with alcohol… That alone was the best thing I could hear.

Without going into details of my case, this was the best possible outcome I could have been given, and I’m so happy that I was recommended to him by a fellow law professional that went to school with Jeff. I will be using him again when the time comes to put this case behind me for good, and would recommend him to anyone who needs expert defense, and wants someone to explain your case in simple, yet professional terms. I felt very well taken care of. Thank you again, Jeff!

The Best Lawyer I’ve Ever Come Across

I got my first DUI in April when I fell asleep in my car because I couldn’t get inside my house. I knew I needed a lawyer to help me fight the case but I was really hesitant on who I wanted to hire. I came across Jeffrey Wolf and I couldn’t be any happier that I chose him to represent me. Jeffrey is not only very professional but he can also relate to you on a personal level. Since it was my first offense I had no idea what to expect or what I was doing. He guided me through the whole process and I was very pleased with the results. He was able to convince the Judge to let me off with 6 months of unsupervised probation and level 1 education classes. Jeffrey is very loyal and a wonderful lawyer, definitely hiring him again if need be.

A Man of Passionate Action!

Colorado Law had recently passed a law, that would help me in the messy situation I was in. I knew immediately I had to find a lawyer to discuss the situation and the circumstances surrounding the process, and eligibility requirements for my specific case. I have to admit, I was very nervous reaching out to any lawyers who could help me.

So I did my research to the best of my ability, and having questions to ask to confirm I was making the right choice in a lawyer. A friend of mine who had previously worked with Mr. Wolf, had strongly recommended that I contact him. I am very grateful that I had! He was very respectful, and had a obvious passion to help me, asking specific questions surrounding my situation so that we can both deal with the issue at hand. Talking me through the processes and possible outcomes, straight forward. No sugar coating, which is nice because I value honesty.

Throughout the whole process, I was comfortable, and very trusting, as questions were answered accurately and after I tried contacting him with new questions or comments, he would return my call or email within 24 Hours! That showed me that he cared and was on top of his workload.

Nonetheless, the outcome of my case worked really well for me, and was a success. And for that, I want to show my gratitude.

Thank You Mr. Wolf for being on my side! I strongly recommend to anyone looking for a well competent lawyer, to contact Jeffrey Wolf at Wolf Law!

Jeffrey Wolf has been a beacon of hope to me when my situation seemed limited and unlikely of a positive outcome. He represented me for a DUI and as a domestic violence victim and did a phenomenal job on both. Not only was he able to defend and represent me, but his empathetic and ethical demeanor offered hope to myself and someone I truly care about. My partner and I are eternally grateful for his service, and I hereby recommend him without hesitation since I could not imagine a better result without him representing me.

I would like to place on record the immense appreciation for Ms Colleen Kelly, Partner at Wolf Law LCC. I had an opportunity as a Solicitor to interact with her on behalf of one of my clients in a DV Matter. Her professionalism and knowledge of law is absolutely outstanding. She is extremely honest and straightforward in her legal advice. She always keeps the interest of the client a priority and safe guards the interest of the client at all times. She is an asset to the legal team and adds value with her expertise and knowledge.