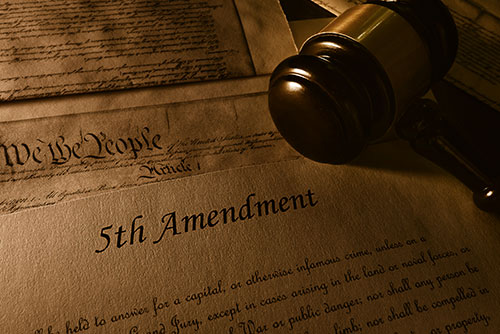 The Fifth Amendment to the U.S. Constitution includes a clause that protects individuals from being compelled to incriminate themselves in criminal matters. Similarly, the 1966 Supreme Court decision in Miranda v. Arizona established the so-called “Miranda rights” or “Miranda warning,” in which a person who is under arrest must be notified of their right to remain silent and right to consult with an attorney.

In this post, the Denver criminal defense lawyers at Wolf Law take a closer look at protections against self-incrimination and discuss when and why to invoke your right to remain silent.

In 1963, Ernesto Miranda was arrested by Phoenix police based on a tip that linked him to the kidnapping and rape of an 18-year-old woman. After hours of interrogation, Miranda signed a confession that certified his statement was made voluntarily and with no threats or coercion, and with full knowledge of his legal rights.

However, law enforcement failed to inform Miranda of his right to counsel, and he was neither advised of his right to remain silent nor that statements made during his questioning could be used against him in court. Although Miranda’s court-appointed defense attorney objected to the admissibility of the confession, Miranda was ultimately convicted.

The trial court’s decision was affirmed by the Arizona Supreme Court upon appeal in 1965, but additional criminal defense lawyers joined Miranda’s cause and appealed the case to the U.S. Supreme Court. The Supreme Court ruled in favor of Miranda, citing in part the Fifth Amendment’s protections against self-incrimination and the Sixth Amendment’s establishment of the right to an attorney unless a criminal suspect had been made aware of and waived that right.

It should be noted that Miranda was retried in 1967 after the original case against him was thrown out. Instead of relying on Miranda’s original confession, prosecution introduced new evidence and called new witnesses, one of whom testified that Miranda admitted to her that he committed the crime. Miranda was sentenced to 20-30 years in prison, although he was paroled in 1972.

What Is a Miranda Warning?

Following this historic case, law enforcement nationwide were required to inform those under arrest of their rights prior to police questioning. Police departments across the country began circulating cards containing the Miranda warning, which officers could recite during arrests.

The Miranda warning serves two primary purposes: 1) It preserves the admissibility of statements made during legal law enforcement interrogations and 2) It protects an individual who has not yet been charged with a crime from self-incrimination before they have the opportunity to consult with an attorney.

Although the wording of the Miranda warning varies by jurisdiction, it typically includes the following points:

Police officers often avoid arresting a suspect until after they’ve collected incriminating statements—in other words, statements made to police before an official arrest or the issuing of the Miranda warning. However, any statement or confession made by a suspect can’t be used as evidence if police arrested and questioned an individual without first providing a Miranda warning. Furthermore, any evidence gathered as a result of those statements may also be precluded in court.

When is Silence an Option?

Unless a police officer has probable cause to make an arrest, reasonable suspicion to conduct a search, or is armed with a warrant, individuals are under no obligation to answer law enforcement questions or even remain in contact with an inquisitive officer—an individual could legally walk away from the scene.

Conversely, an officer can legally ask questions or request to make a search, even without suspicion, so long as the officer doesn’t suggest that the individual is legally compelled to comply—the individual could simply decline these requests.

What about a traffic stop? Upon the officer’s request you should show the officer your driver’s license, proof of insurance, and registration. Other than providing the above information, you do not have to answer any questions. You have the right to say, “I’m going to remain silent.”

If an individual chooses to remain silent during a traffic stop, the officer may or may not take further action. The officer, for example, may ask the individual to step out of the vehicle, separating passengers from the driver. The officer can ask questions, but no person in this scenario is obligated to answer the officer.

Regardless of an individual’s choice to remain silent, other evidence may support suspicion or probable cause. An arrest is still possible, and if the suspect chooses to remain silent, they should invoke their right with a clear declaration.

In two cases (Berghuis v. Thompkins and Salinas v. Texas), the Supreme Court decided that silence does not automatically trigger Fifth Amendment privileges (even if the suspect receives a Miranda warning). Prosecutors may also use out-of-custody suspect silence to police questioning as evidence of guilt.

If you’re faced with criminal charges and wish to remain silent, you must verbally indicate that you’re asserting your Fifth Amendment privilege against self-incrimination. By invoking these protections, suspects can end police questioning and request legal counsel. Without a clear declaration, the police may continue to interrogate a suspect who has received the Miranda warning.

Again, it’s important to remember that suspects can invoke their right to silence at any time after the Miranda warning.

Silence does not necessarily infer guilt, and it can protect a suspect from making incriminating statements that may exacerbate the situation. Interrogations can be long and exhaustive, and people say things they don’t mean when they’re tired, afraid, or feeling threatened.

Regardless of the circumstances, it’s generally advisable to invoke your right to remain silent and consult with a criminal defense attorney as soon as possible.

A defense lawyer can protect your rights, advise you of your legal options, and ensure that law enforcement doesn’t overstep its bounds during questioning. An arrest is an intimidating situation, and even an innocent and articulate person can say things that may incriminate them.

If you or a loved one is confronted with criminal charges in Colorado, the skilled Denver criminal defense attorneys at Wolf Law are here to help. Please call us today at 720-479-8574 for a free consultation or contact us online to get started now.