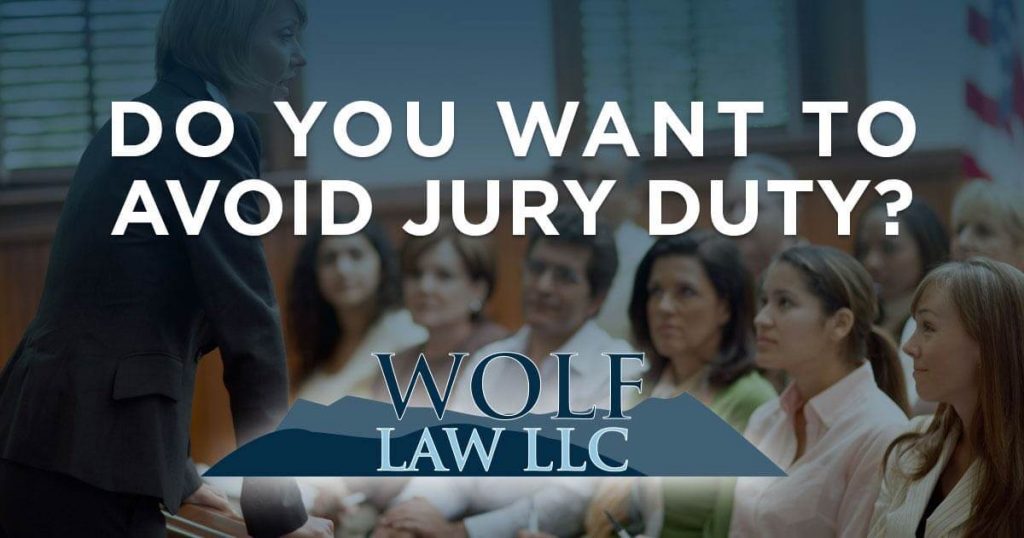 As a criminal defense lawyer in Colorado, friends, family and acquaintances frequently ask me one simple question: How do I get out of jury duty?

I am never surprised by this question. I even have a simple response to best answer their question: YOU SHOULDN’T WANT TO.

Let’s get the patriotic part out of the way. Here in America, we are lucky to have a judicial system that allows for jury service. It lets us be civically active participants in the justice our courthouses are trying to serve up on a daily basis. It is required; some even call it a civic duty. If you vote and/or drive a car in the state of Colorado, you can be called to serve on a jury. Not responding, or being dishonest with judges and lawyers can have consequences. However, none of that is why you should want to serve on a jury.

More importantly, jurors are often a person’s last and best hope for justice in a courtroom. By the time a case reaches a jury trial, prosecutors, judges, and sometimes their own lawyers have often turned defendants in criminal cases away. When a person has the courage to stand up and plead not guilty in a criminal case, they are now turning their hopes to a jury of their peers. This is where the problem of “how do I get out of jury duty” comes in.

If we, as a society, continually ask, “How do I get out of jury duty,” we are letting down those among us charged with a crime. Jurors are an integral part of keeping the system in check and allowing everyone charged with a crime to get a fair trial. Jurors listen to the evidence, consider the credibility of witnesses, and decide whether the state has me their burden of proof required to convict a criminal defendant of the crime charged.

Juries are supposed to be made up of a diverse mix of people from the jurisdiction in which the trial is being held. Ideally, everyone summonsed would be willing and able to serve on the jury. This would provide the best chance at having a wide selection of backgrounds, educations, life experiences and opinions on their jury. The more diversity on the jury, the more likely any set of facts will be heard, understood and properly considered by the members of the jury.

When jurors are disinterested in being on a jury, it not only deprives juries of qualified, intelligent, competent jurors with diverse backgrounds to participate, but also creates a problem for the jurors that are selected to serve. When a majority of the jury sitting on a case would rather not be there, it makes for a jury made up of people who are not paying attention, not actively participating or otherwise not contributing in a meaningful way to the process. This does not provide for an effective jury system.

Jurors arrive at the decision by deliberating together after hearing all of the evidence. If not all of the jurors are invested in listening and analyzing the evidence, than rather the deliberations being a conversation between all of the jurors, it can become one or two invested jurors leading the others who just want to go home. When that happens, a jury of your peers is not trying you, but one or two, which is simply not how the system is supposed to work.

Besides all of the reasons that low interest in jury service hurts the judicial system. It is also important to remember that jury service can be an enjoyable experience and most often is. As a trial lawyer, I have had the opportunities to talk jurors across the state of Colorado after a trial has completed. Overwhelmingly, they have told me that the experience was interesting, engaging and something that they are glad they finally did. Why is this the case? Our TV’s are littered with shows, movies and news about courtrooms. Unless you are employed in a job that has you working in a courtroom, you will never quite experience how real the drama in a courtroom is. Until you serve on a jury that is. As a juror, you have an opportunity to watch real life drama unfold before you and not only be a passive observant of it, but an active participant. To say that serving on a jury is boring, or not worth your time couldn’t be further from the truth.

So, to sum it up, it’s time to suck it up. The next time you get a jury summons in the mail, don’t groan. Get excited, get the day off of work and go take part in a system that needs you, wants you, and will give you rare peek into just what happens after the cops show up.