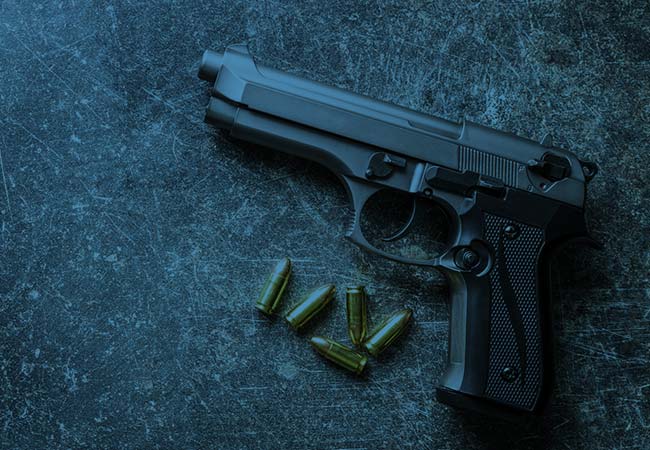 The potential consequences of weapons-related criminal charges in Colorado include prison time and fines that can reach hundreds of thousands of dollars. Because weapons charges often accompany other criminal charges, the accused may face both state and federal crimes, and penalties may be compounded.

If you or a loved one was arrested for a weapons-related charge in Colorado, the criminal defense lawyers at Wolf Law are ready to hear your story. Please call us today at 720-479-8574 or contact us online for your free consultation.

Weapons charges are not limited to firearms alone. In fact, nearly any object can constitute a weapon in the context of criminal charges if that object is linked to other criminal charges, such as assault.

Intent is often an important factor in weapons-related charges. For example, an otherwise harmless object may be considered a “deadly weapon” if the object was used with the intent to cause harm.

The right to own firearms comes with qualifications, and even valid gun owners can face criminal charges based on where the firearms are possessed or how they are used. Common firearms charges in Colorado include but are not limited to:

Firearms charges can range from misdemeanors to felonies, and their corresponding penalties can be severe, especially if the individual has a criminal record or additional corresponding criminal charges are filed.

A firearm or other weapon change can have far-reaching consequences including incarceration and/or costly fines. A firearm or weapon charge can also limit a person’s right to own a gun in the future, job eligibility, and even housing opportunities.

Following is a list of some common firearms and weapons charges, as well as their potential punishments:

Penalties typically increase for repeat offenders, crimes of violence, or when aggravating circumstances are present.

According to a Bureau of Alcohol, Tobacco, Firearms and Explosives report, 4,905 firearms were traced and recovered in Colorado in 2017. Not all of the firearms traced were used in crimes, but the top categories reported for firearm traces were related to possession charges and weapon offenses.

If you’re facing weapons-related charges in Colorado, you need an attorney who understands the complex state and federal regulations that impact your case.

The Denver criminal defense lawyers at Wolf Law have extensive experience handling a broad range of criminal offenses, including those involving weapons. Our attorneys are dedicated to providing compassionate, aggressive representation for those charged with or under investigation for a crime.

Please call Wolf Law today at 720-479-8574 or contact us online for a free, no-obligation consultation.

Mr. Wolf was recommended to me through my cousin. I was facing a very serious legal matter and Mr. Wolf was amazing. He explained everything to me in detail. He listened to my questions and was very helpful. I am so thankful that he was my lawyer.

Wolf Law is Well Worth the Investment

Thanks to Jeff Wolf I had the ideal outcome on my case, whereas without any representation it would’ve been a less than desirable outcome without me even fully knowing my options. He was extremely informative and thorough; it was clear that not only did he know what to do for every scenario but I was confident that he would make it happen, which he did. Very personable and easy to trust, I highly recommend Jeff and Wolf Law.

I cannot speak high enough of Mr. Jeffrey Wolf! He was very pleasant to work with and explained each step of the journey from start to the final video teleconference with the judge. He negotiated a much lower sentence with the DA from DUI to DWAI. He reiterated several points that were then considered by the judge and taken into account in deciding my sentence. He was always prompt in any communications and worked tirelessly on my case to get a very favorable outcome for me. I would whole-heartedly recommend Mr. Wolf as you can be ensured it felt like I was an individual that truly mattered to him and his practice. From the very first phone call, I had nothing but respect for him and felt I was in good hands, that he then proved! You can’t go wrong with Mr. Jeffrey Wolf!

I have contracted Cassandra twice now and both times had outstanding results. In the first case she got the results I tried to obtain with ease. When I spoke on my own behalf to the district attorney they wouldn’t budge in any way. Once Cassandra was involved it was like watching a master at work. She stated the facts and provided evidence to back her argument in my situation and actually got better results then I initially wanted. Then in a second unexpected turn of events she yet again worked her magic. She remained real with me the entire time and explained the reality of the situation and prepared me for the worst while still working hard to achieve the best results and let me tell you she far beyond exceeded expectations. Her hard work and perseverance caused unheard of result and I couldn’t be more satisfied. Throughout the entire process she never misled me, always remained patient and understanding; she always listened and always made sure to go the extra mile to make sure things went as planned. I was never charged with surprise fees or felt taken advantage of financially in any way. What I paid for the service and commitment to my case is unheard of in this day and age. I would recommend Cassandra and Wolf Law to anyone I know who is having legal troubles. You will not be disappointed! Sincerely thank you again to Cassandra and Wolf Law for everything you have done.